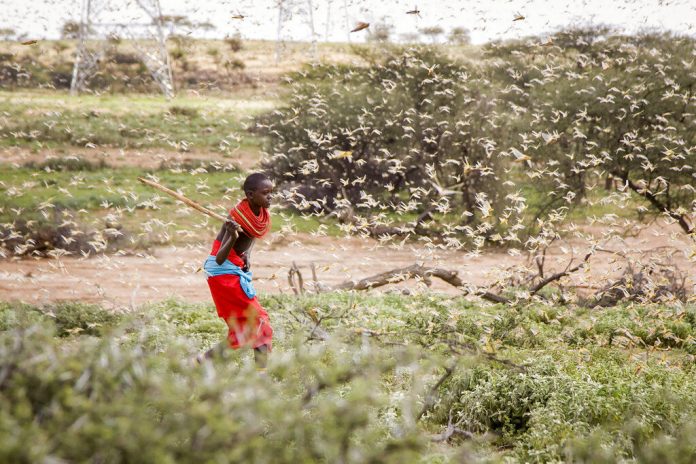 While much of the world focuses on the coronavirus pandemic that has infected more than 1.6 million people across the globe, East Africa is battling the worst invasion of desert locusts in decades — a months-long “scourge of biblical proportions” that experts warn could get worse with a larger second wave already arriving in parts of the region.

The Food and Agriculture Organization (FAO) of the United Nations, which is shepherding the global response to the region’s locust crisis, “estimates that locust numbers could grow another 20 times during the upcoming rainy season unless control activities are stepped up,” U.N. News reported Thursday.

“The current situation in East Africa remains extremely alarming as hopper bands and an increasing number of new swarms form in northern and central Kenya, southern Ethiopia, and Somalia. This represents an unprecedented threat to food security and livelihoods because it coincides with the beginning of the long rains and the planting season. Although ground and aerial control operations are in progress, widespread rains that fell in late March will allow the new swarms to mostly remain, mature and lay eggs while a few swarms could move from Kenya to Uganda, South Sudan and Ethiopia. During May, the eggs will hatch into hopper bands that will form new swarms in late June and July, which coincides with the start of the harvest.”

The massive swarms, as Common Dreams has reported, are partly fueled by the climate crisis and have affected Djibouti, the Democratic Republic of Congo, Eritrea, Kenya, Ethiopia, Somalia, South Sudan, Tanzania and Uganda. The pests have also been spotted in Yemen, Saudi Arabia, Qatar, Bahrain, Kuwait, Iran, Pakistan and India.

The main method of battling locust swarms — which each can devour enough food to feed 35,000 people in a day — is the spraying of pesticides. Concerns are mounting that locust eradication efforts in the region will be increasingly hampered by pandemic-related travel restrictions and supplies problems. Read more…