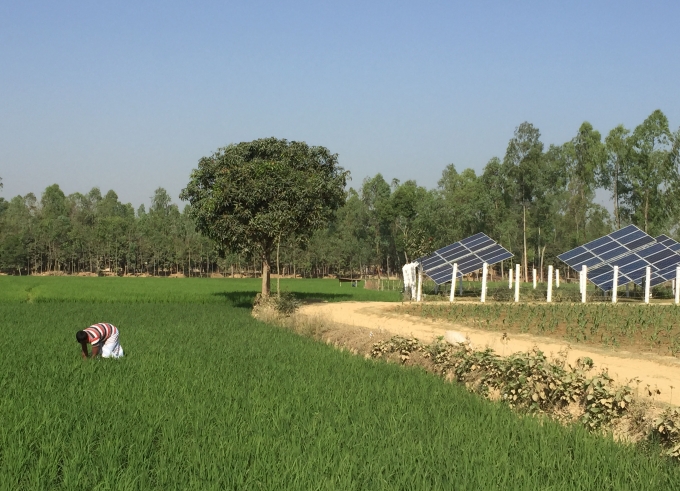 Most people know Fourteen Falls, a cascade of waterfalls on the outskirts of Thika, as a recreational site, a date with nature of sorts.

But what many probably aren’t aware of is the existence of a tiny island, a five-minute walk upstream along the riverbank from the idyllic waterfalls. Here, small shanties dot the land. Completely cut off from the national electricity grid, piped water and other basic amenities, homes here have to improvise to survive. While some are stuck with kerosene lamps for lighting, others are tapping solar energy with small panels.

Interestingly, the five-minute walk from Fourteen Falls on Athi River to the small island will see you leave behind Kiambu County and enter Machakos. Athi River straddles the two counties.

On the tiny island, along the river and surrounded by a stream, we meet 14-year old Nzioki Mwaniki, a lanky boy, whistling and marching towards the river pond for a dip.

He’s now in Class Eight, he tells us after resurfacing from his headlong dive. The still waters, partially bounded by protruding rocks to form a pond, have a spooky feel. Occasionally, a monitor lizard darts across, its snake-like head zipping gracefully above the surface of the water as the body remained submerged. The young boy swims, unfazed. He has learnt to coexist with such sea creatures.

For Nzioki, swimming is a necessity, a survival craft in his family’s daily subsistence on the tiny island. To go to school, he swims across the river, his uniform wrapped in a plastic bag, which he then slips into on the other side. He is the third born among five siblings.

As expected, his family’s protein needs are duly replenished by fish, bush rabbits and birds, all around them. A complete ecosystem that gets them going.

A week before Christmas, the boy says, the family caught two fish, each his size. One was sold to a middleman at a nearby small market at Sh1,000 while the family of seven, including the parents, feasted on the other catch for three days.

But the downside is that effluence from the capital Nairobi and industries in Thika town finds its way into Athi River, whose water colour is turning darker, carrying sewage and all.

Nzioki’s family lives in acute poverty, though. All of them are crammed in a one-room tin shack, held above the ground by rickety wooden pillars. The space beneath the shack serves as the fireplace, the kitchen, where cooking takes place. It’s also where the family dog sleeps.

Despite destitution and want and lack, the boy can afford to do his homework at night thanks to a small rooftop solar panel that his farmhand father bought at Sh750. The panel can light their single room’s bulb and charge a flashlight.

He says he’s proud of the solar panel since most of their neighbours have none and continue to rely on kerosene lamps.

“We’re the only ones with the solar,” he quips, his eyeballs bulging with a mixed sense of childhood pride and excitement.

Born on the island and having known no other home aside from his village, Nzioki has never left his hometown of Ol Donyo Sabuk. He never plans to leave, he says with the raw innocence of a youngster.

“I hear people who leave for big towns, especially Nairobi, never come back to their homes, to their parents,” he says wistfully, eyes lost in the distance from the rock he’s perched.

And what does he want to do after school?

The 14-year old boy says he wants to be a farmer, a farmer of horticultural produce.  He shared that they had been taught at school that solar energy could be used for irrigation, for powering solar water pumps. That’s exactly what he has in mind, he says. Plus, he feels having grown up surrounded by water mass and being the only home among his neighbours with a solar panel, albeit small, gives him a head start in combining the two elements of nature for commercial gains.

Presently, his family relies on rudimentary, outdated irrigation method of drawing river water with buckets as they can’t afford pumps.

We remind him to be a successful horticultural farmer he, at some point, will have to move out of his hometown to learn from the best, to learn best practices. He smiles, studying our face, upon which he asks: “Are you from Nairobi?”

“Is it good there?” he queries further.

He doesn’t say another word. Instead he looks around with a poker face, a face hard to read, and takes a plunge into the still waters.

As we bid goodbye, we remind him to dream big, promising to take him with us to Nairobi soon for a one day round trip for him to have a feel of the city, for him to have exposure outside his home village. For him to find yet another reason to be proud, besides being the only home on the island with solar power.

Read also: Memories Of Seasons That Did Not Change