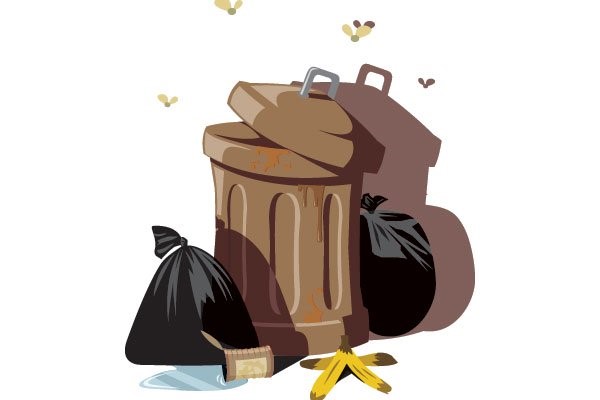 As the world hurtles towards its urban future, the amount of municipal solid waste, an important by-product of an urban lifestyle, is growing faster than the rate of urbanization. The world cities today generate about 3 billion tons, amounting to a footprint of 1.2kg per person per day and expected to rise to about 4.3 billion by 2025. According to the World Bank (2012), waste generation in Sub-Saharan Africa is approximately 62 million tons per year, amounting to a footprint of about 0.65kg per person per day.

Regions with low-income countries tend to have low waste collection efficiencies. Moreover, major cities achieve a higher collection rate than smaller cities. This is well explained in terms of the focus of Municipal Solid Waste Management(MSWM). For instance, in developing countries, MSWM focus on the timely removal of wastes from densely populated areas to maintain hygiene and health, whereas, thinly populated areas, where empty spaces are available for waste disposal, are not covered by collection services due to limited municipal budgets. This particular discrepancy demonstrates why it is important to use the population covered by the municipal solid waste collection as a public service instead of the statistical population to avoid underestimating municipal solid waste generation per capita.

MSWM system in East Africa has changed from the colonial years of the 40s, 50s and early 60s when it was efficient because of the lower urban population and adequate resources, to the current status that displays inefficiencies. Solid waste collection demand in East African urban councils has rapidly increased as the urban population increase with the accompanying expansion of settlements mostly occupied by the peri-urban poor that receive little or no waste services at all.

According to NEMA (2014), Kenya has a growing population and urbanization that has put much stress on waste management. Despite the existence of laws, policies, and regulations on solid waste management, weak implementation has led to towns and cities being overwhelmed by their waste. Most local authorities do not prioritize the establishment of proper solid waste systems and hence allocate meagre resources. Most of the counties lack proper and adequate disposal sites hence practising open dumping. Solid waste management is a responsibility amongst all actors including the county government, generators, owners, occupiers of premises and contracted service providers.

Nairobi, with an estimated population of 3.5 million (National Population Census Report, 2009), generates a wide variety of solid wastes that cannot be assimilated in the city environment, with of its estimated 3.5 million residents generating between 200 to 800 gram of solid waste every day. Only half of the estimated 3000 tons of waste generated every day is collected. On the other hand, Nairobi has no means of safe disposal and only 400 to 600 tons of its waste reaches the Dandora dumpsites every day. Dandora is the only operational official dumpsite of the city waste and its capacity is almost full due to urbanization and population growth (Njoroge et al., 2014). In terms of resource recovery, 250-300 tons per day of reusable and recyclable waste is recovered, accounting for only about 8-10% of the waste stream (Integrated Solid Waste Management Plan, NCC/JICA, 2010).

In the slums, where 55-60% of Nairobi residents inhabit, they rarely receive waste collection services. It is also believed that a majority of the households are quite poor and low-income earners which also makes it hard to have formal waste management.

Various efforts have been made in a bid to improve solid waste collection and disposal system, including the practice of sanitary landfilling, where state-of-the-art incinerators are implemented as well as NEMA directing all county governments to designate areas of waste disposals and undertake actions to manage the sites including fencing, manning and weighing of the waste. Currently, Nairobi City County is responsible for solid waste collection and disposal, but this overall mandate which is more decentralized faces a lot of challenges and gaps in knowledge, hence the need for technologies to improve the current state in the county.

Eco- enclaves Are The Way to Go For Kenya