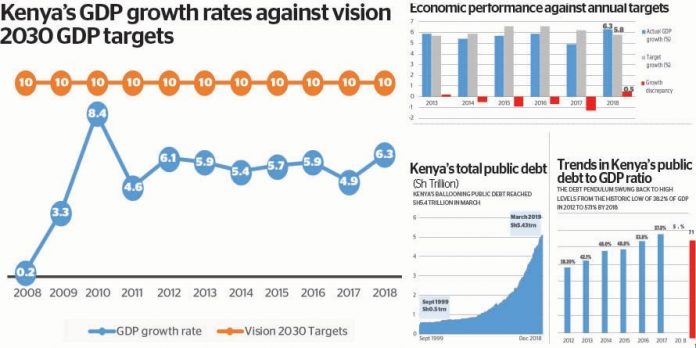 It is a brand and mindset less of top economics than “shoot first” cowboy bravado on spending and excessive debt that avoids prior scrutiny on growth and development results, let alone the morass of corruption and audited looting.

But low bandwidth economic policy bungling is not uncommon. And we can correct it. President Bush Sr. once called Reagan’s economics “voodoo economic policy.” Tax and trade policy errors pepper Donald Trump’s tweets. Unabashed, he hits out at the Fed (central bank) to salvage himself. The Fed holds firm.

A helter-skelter lack of firmness or capacity marks the Treasury’s brand weaknesses. It sets targets it does not meet, as per main economic indicators. It treats austerity as a mere conversation. Development allocations go unspent or mutate to recurrent spending in lip service to development.

We misrepresent it when Treasury tosses CBK Eurobond proceeds to reserves: that renders CBK a cashier for repayments.

Worse, the interest rate cap argued in defence of private sector credit has mutated to bargain-floor borrowing (in T-Bills and bonds) for the government which sweeps taxpayer funds to commercial banks in redemptions. How will future generations repay debts from a contracting economy? Read more>>

Insecurity In Niger: Reversing The Gains Made In Land Restoration

What Passenger Cars Are Made Of: A Key Issue For Climate...