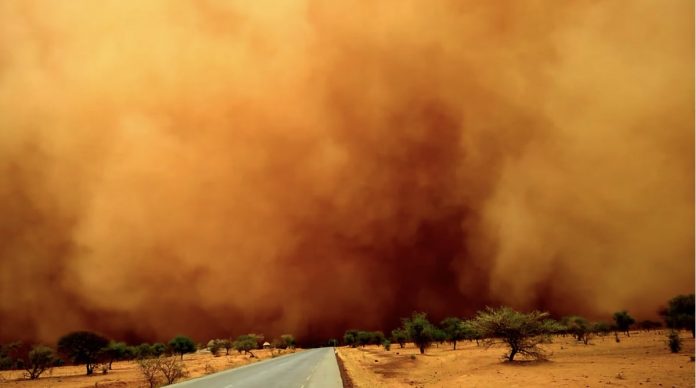 On the launch of the report, Impacts of Sand and Dust Storms on Oceans: A Scientific Environmental Assessment for Policy Makers, author and University of Oxford lecturer, Nick Middleton discusses how the dust cycle affects and interacts with other global-scale biogeochemical cycles.

What exactly are we talking about when we refer to the “dust cycle”?

The dust cycle describes the movement of trillions of tiny particles through the Earth System. Sand and dust is raised by strong winds from areas of bare or sparsely vegetated ground. While some of this material falls back to the surface near the source, the smaller dust particles are carried further in the wind – sometimes thousands of kilometres – before being deposited.

Each year, an estimated two billion tonnes of dust is raised into the atmosphere; and one-quarter of this reaches the oceans.

Is this movement regular and predictable?

These long-distance dust flows are highly seasonal and can vary significantly from year to year. But most dust comes from deserts and semi-deserts, and a particularly dusty area known as the Dust Belt stretches from the Sahara across the Middle East to the deserts of Central and Northeast Asia.

The planet’s largest sources are in the Sahara. Much Saharan dust is transported south-westward by the Harmattan wind that prevails between November and April. This dust has marked effects on the North Atlantic and the Caribbean Sea, but Saharan dust also impacts the Mediterranean Sea and the Red Sea. Read more…

Kenya Is Mobile Cash King But Ghana And Rwanda Lead In...