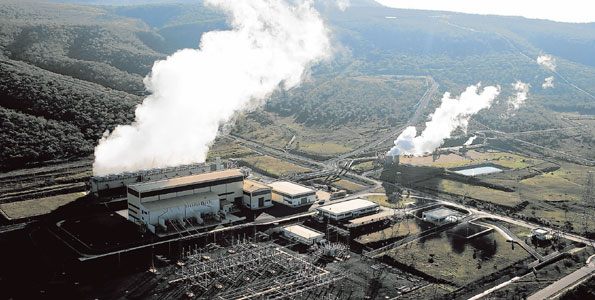 The story of Kenya’s latest geothermal power plant to go live, Olkaria V, goes back to January 2017 when construction works took off.

From the barren, rugged fields full of jutting volcanic rocks in Kenya’s Rift, a building structure has been rising over the past three years to stand majestically, visits to the site reveal.

The humming Olkaria V steam-powered plant with a capacity of 165.4MW and sitting in Naivasha’s Olkaria steam fields is now complete and generating and supplying clean electricity to the national grid.

Construction works for the Sh45 billion ($450 million) steam plant kicked off in January 2017, marking a three-year turnaround period from groundbreaking to completion.

The first half of the plant went live in July 2019 with the other 82.7MW following this year. President Uhuru Kenyatta is set to officially commission the whole plant in coming days, according to Energy cabinet secretary Charles Keter who this week hosted his Ugandan counterpart Mary Kitutu for a tour of the geothermal plants.

A trip to the site offers a glimpse of the new plant. It hums softly as the ripening fruits of three years of hard work get harvested to be savoured by the whole nation. Breathing out columns of feathery white steam that can be seen drifting skyward, geothermal is green and clean as it is cheap and wholesome, providing a balanced diet for the economy’s energy appetite.

Like other geothermal projects, fieldwork development for Olkaria V involved gathering of steam from different wells through a piped network funneling the vapour to the plant, to turn turbines.

A turbine, the heart of the plant, converts steam to mechanical energy, which is then passed through a generator attached to it through the rotor to produce electricity. The generated power is then injected into the national grid through substations and transmission lines that transport it to homes and businesses.

A turbine is the single most expensive equipment in the construction of a geothermal power plant and is made of hardened steel alloys to withstand thermal stress for up to 30 years.

In the case of the165.4MW Olkaria V plant, it has two units, each with a net capacity of 82.7MW. Each unit has its own set of turbines and generators and each turbine stands to absorb 500 tonnes of dry steam per hour at elevated temperatures of about 270 degrees Celsius, meaning the steel has to be hardened to withstand the heat.

Now, the new plant has raised Kenya’s total capacity of steam power to over 800MW. Presently, the country is ranked eighth largest producer of geothermal electricity in the world and the first in Africa.

Olkaria V plant belongs to Kenya’s largest power producer, KenGen and its construction was contracted out to a consortium of two Japanese firms, Mitsubishi Corporation and Mitsubishi Hitachi Power Systems, along with a Kenyan civil engineering firm, H Young.

Japanese firms have long cemented their spot as top builders of Kenya’s geothermal power plants and suppliers of heavy duty equipment such as steam turbines.

Other firms from the Far East nation with a foothold in Kenya’s geothermal fields include Toyota Tsusho and Toshiba.

Power consumed in the Kenyan economy is a blend of different sources, largely geothermal (nearly half of the generation mix), followed by hydropower, wind and diesel-generated electricity.