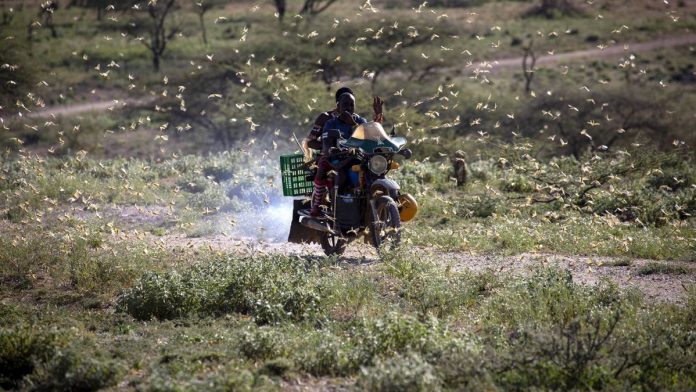 The Pan African Climate Justice Alliance (PACJA) has called for an audit of the damage done in Kenya’s croplands by the deadly swarm of desert locusts to ease planning and budgeting for shortfalls ahead in local supply.

In an interview, PACJA executive director Mithika Mwenda said that the question wasn’t whether damage had been inflicted but to what extent. He warned that failure to establish beforehand the extent of the damage would result in last-minute attempts by policymakers to avert a looming food crisis but it would be too late. Although the government has deployed helicopters to fight the swarms with pesticides, among other measures, the locusts have proved unrelenting, sweeping downward and clearing large swathes of cropland.

“Today, unfortunately our focus is on other things like the BBI report while giving little attention to the locust invasion whose impact is soon to be felt by all Kenyans, especially those at the bottom of the food chain as shortages will likely drive up prices and starve farmers of a source of livelihood,” said Mwenda on the sidelines of a conference in Nairobi.

Mwenda said that the fact that Kenya is an agrarian economy, it cannot afford to overlook anything that poses a threat to its food basket, be it locusts or any other threat. Agriculture accounts for over a quarter of Kenya’s gross domestic product (GDP) and employs over half the population.

An audit of the locust-inflicted damage will, among other things, inform the government how much to budget for shortfalls, which will likely be plugged through imports in efforts to fight a possible rally in inflation, said Mwenda. Food carries the biggest weight in the basket of goods and services that Kenya’s statistics office uses to compute the cost of living measure, also known as inflation.

At the same time, he said, manufacturers who rely on locally produced agricultural inputs could be forced to turn to imports should the local supply line be cut off by the locusts. This would result in higher production costs, most likely again to be passed on to consumers and further driving inflation.

According to PACJA, locusts are a menace because of their uncanny ability to change breeding patterns based on their environment. For the desert locusts, as long as there is food, further breeding is guaranteed.

The locust menace has exposed a lack of disaster preparedness by both the national and county governments, along with a wobbly damage control system.

National government honchos have admitted being caught off-guard despite an earlier warning by the Food and Agricultural Organization (FAO) of an impending locust invasion.

The attack of this scale – not seen in at least about two decades – has already wreaked havoc in adjacent countries –Somalia, Ethiopia and now Kenya.

PACJA admits that although pesticides are not good for the environment as well as the health of the people, it currently remains the best mechanism to control the spread of the swarms.

The pan-African agency reckons that African countries need to be proactive more than reactive in handling disasters.