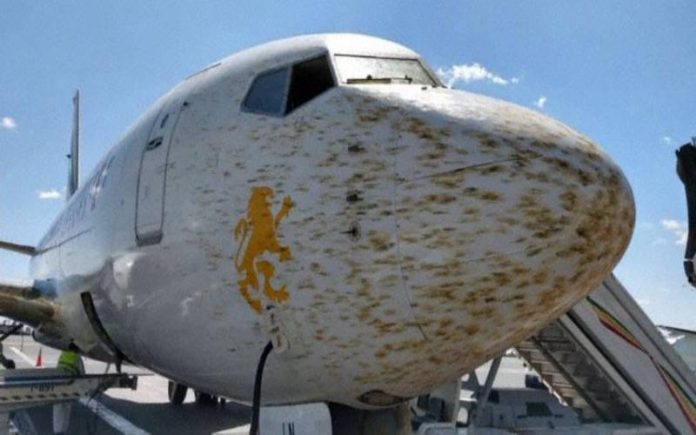 An Ethiopian airliner (Pictured) was on Thursday diverted to Addis Ababa Airport after colliding with a swarm of locust midair. The plane, Boeing 737-700, registration ET-ALN performing flight ET-363 was flying from Djibouti to Dire Dawa, Ethiopia.

As it was approaching Dire Dawa for a landing, the aircraft initially flew through a small number of locusts, Aero-News, a multi-channel aviation digital hub reported. The crew decided to approach Dire Dawa with caution since the locusts were not enough to prevent them from approaching the airport.

A few moments later, the plane hit a larger swarm with some locust trapped in the engine and others hit the windshield which impacted and reduced visibility from the cockpit window. According to simplyflying.com, the pilot tried in scant success to clean the screen using wipers.

The pilot tried twice to land at Dire Dawa without success and the plane was diverted to Addis Ababa where it landed safely 30 minutes later.No casualties were reported and the Dire Dawa bound passengers had another flight.

Various sources reported that the plane was grounded for a couple of hours as it underwent thorough inspection and cleaning. However, no damage was reported. After the inspection, it operated a scheduled service between Addis Ababa and Entebbe, Uganda, before resuming full service over the weekend.

East Africa has been plagued with desert locusts for that last two weeks with the United Nation’s Food and Agriculture Organisation (FAO) warning of the destructive pests. Affected countries include Ethiopia, Kenya, Uganda and Somalia.

According to FAO, the swarms can be up to one-kilometre-wide consisting of about 80 million locusts. In Kenya, the locust invasion had spread to Kirinyaga County on Monday morning as government agencies continue to be on the lookout to avoid escalation of the situation. Read more…

A Clue To Stopping Coronavirus: Knowing How Viruses Adapt From Animals...

Rooting For The Environment In Times Of Conflict And War