“I am not poor; why should I care about other people’s economic situation?” This is a common phrase among the middle and rich class in most African countries. We are all too busy trying to live and mind our own businesses without regard that all humanity’s way of living has an impact on each one of us.

Imagine walking in Carrefour – the leading shopping mall, retail and leisure pioneer in the Middle East, Africa and Asia – pulling a trolley full of stuff that neither you nor your entire family will be able to finish. Do you ever feel pity for that poor neighbour’s child who cannot play with your children just because their clothes are dirty and torn? How often do you throw away food in the dustbins with the excuse of being modern and not finishing what is on your plate? Has it ever occurred to you that there is someone out there who wishes to have only a fraction of what you got? 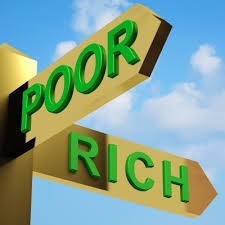 African countries are divided into two classes: The rich and poor. Unfortunately, the majority of people are poor. Each society has specific attributes that are part of its culture. Richer people are literate, industrialized, overfed and comfortable. On the other hand, poor people are illiterate, under-developed, hungry, malnourished, and struggling to merely survive on this planet.

The gap between the rich and the poor is very wide and uneven. It is a real thing that exists and affects every aspect of life.  Poverty is a real struggle that its purpose is to merely survive. There is no shortage of research and literature going in-depth about how 0.00001% of the world’s population has more money than half of the world’s population. But seriously, should we care?

Over half of the nations in Africa are considered the poorest countries in the world. Even though the continent as a whole is developing quickly, the economic gap between the rich and the poor is widening. More people are living in extreme poverty, unlike their counterparts who enjoy luxurious lifestyles without the concern of others.

But what is the problem?

Is it the fault of the rich or the poor? I know very many rich people who have struggled their way up and are currently eating life with a big spoon. On the contrary, I also know people who survive on merely less than a dollar a day. A report by the UN states that more than 700 million people – 11 percent- of the world population, still live in extreme poverty and are struggling to fulfill the most basic needs like health, education, and access to water and sanitation. This is set to rise if the world does not take action to improve the living standards of its people.

As human beings, our wellbeing is linked to each other- whether rich or poor. The overwhelming pressure is due to inequality that deteriorates economic growth and undermines social cohesion, increasing political and social tensions hence driving instability and conflicts

According to economist Jeffrey Sachs, economic balance is key. If African countries are looking towards achieving sustainable development, countries such as Somalia whose government is unstable should efficiently create conditions that allow people to have quality jobs.

Oxfam reports that in Nigeria, the scale of inequality has reached extreme levels. Five of the wealthiest people have a combined wealth of $29.9 billion- more than the country’s entire budget. It further explains that about 60 percent of Nigerians live on less than a dollar a day.

Examining the income ladder in African countries, the rich are becoming less and less sensitive to the plight of the poor as they demonstrate their material success. The wealthy do not care about the rest of society. This kind of segregation builds a gap between the rich and the poor which greatly hinders sustainable development.

To successfully achieve sustainable development goals, there is a need to bridge the gap between the rich and the poor. The economy has to be scaled to accommodate all citizens without grading them on their wealth. When equality is addressed, everyone is satisfied and the growth of the economy is enabled.

Aeroponics: A Tool for Food Security